Though no one knows the exact figure for sure, the National Park Service estimates that there are over 1,000 caves worming through the Redwall and Muav limestone layers of the Grand Canyon. But even though you can see openings in the cliffs all over the place with a pair of binoculars, most of these hidden spaces have yet to be entered — let alone surveyed — owing to extreme difficulty of access.

It’s important to say at the outset of any post on Grand Canyon caving that, with the exception of Cave of the Domes (COTD), all of the canyon’s underground spaces are off-limits to recreational exploration. Contrary to what some may say, this isn’t because the resource management staff at the park want to ruin people’s fun. Instead, it’s to protect delicate geological, paleontological and archeological resources for future study.

What’s more, conducting a rescue in the canyon is already an inordinately daunting endeavor without the exigencies of a speleo extraction heaped on. I’ve heard that even the relatively simple task of finding a body that’s tumbled off the rim can take days and days. Heaven help you if you injure yourself in a cave you’ve gone into illegally!

So, being sympathetic to the Park Service’s conservation goals and safety concerns; Mag, Nick and I secured a permit for COTD and limited the scope of our adventure to this and only this cavern. If we one day venture into other voids in the Grand Canyon, we will do so as official park volunteers in a research capacity.

To reach the Redwall limestone, which is the 340 million-year-old host rock for COTD, you have to hike off the south rim some 2,500 feet down past newer, overlying sandstone layers. I won’t tell you exactly where COTD is (again, you need to get in touch with park officials first), but it’s somewhere in the relative vicinity of Horseshoe Mesa — a massive, bifurcated prominence perched another half-mile above the Colorado River.

Although we’d initially planned on descending the morning after our arrival to the canyon, we were so antsy after six hours in the car that we decided to start the hike at midnight under the sort of deep and coruscant sky that makes you feel like you’ll fall into it. We eventually made it to our campsite around 2:30am.

But in spite of having only a few hours of sleep under our belts, we rose at daybreak with a preternatural energy — awake, euphoric, ready for anything. In the quiet of the gloaming, we watched the Earth turn for a moment, the rising sun our point of reference, pouring out a river of silver fire into every crevice and gully. Then we trekked over to the cave’s entrance.

What more can you say about holes in the ground — about the absence of stone, of light, of sound? How many variations on the theme of cave are possible? How long before the melody’s latent potential is thoroughly exhausted? Perhaps, as Schoenberg held, “There is still plenty of good music to be written in C major.” Perhaps, on the other hand, I wore out the topic weeks ago.

While I am not sure how sustainable these cave diaries are in terms of reader interest, I am sure that every time I go caving, I find both a novelty and an ineffability that promises not only to keep me completely captivated for a lifetime but also to ultimately elude any attempt I make to put the experience of being underground into words.

There are trillions of things I could say about my journey into COTD, but what I keep coming back to is this feeling I got walking through a certain corridor — a feeling that, as I’ve said before, I’ve been struggling to articulate.

The feeling was strongest as I walked upright down a hallway that runs perpendicular to COTD’s main passage. Here the space is tall and wide. Stalactites stab out of cracks in the ceiling, draperies flow from the corners and mammillary formations encrust the walls. For its part, the floor is covered with debris — large boulders that you’re climbing up and down, up and down as you plunge further in.

I found myself caught between a number of dialectics of sensation in here. The inherent peril of negotiating rough terrain in a very remote environment versus the serenity of sensory deprivation. Evidence of geological violence — a sort of protracted iconoclasm — versus sculptural ornamentation layered on top of previous destruction. There’s the cave’s indifference and longevity versus your own fascination and ephemerality. There’s the sepulchral deadness in the air versus the supreme beauty of an architectural space that admits human passage without being designed to do so.

All of these contradictions and more invariably leave you in a state of rapt perplexity, and somehow this perplexity is addictive the way other sorts of ecstatic states are. The underworld forces antonyms into union and thereby obliterates the line between possibility and impossibility. I can’t get it out of my mind. 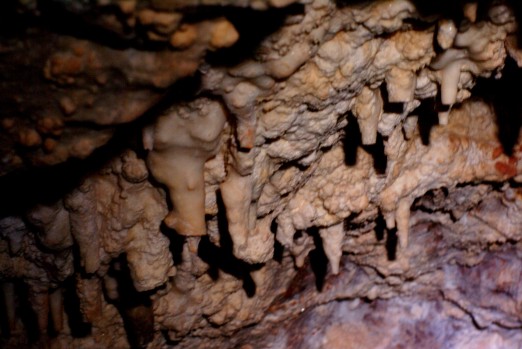 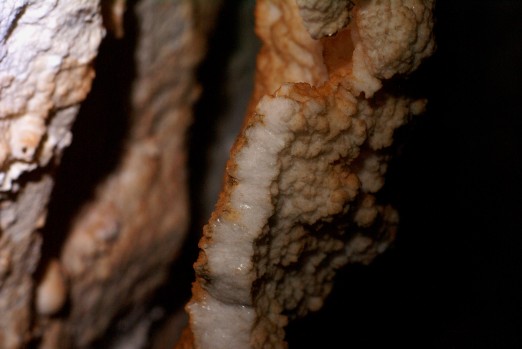 The top of a Utah agave springs forth from Horseshoe Mesa. (Photo: Mag Kim) 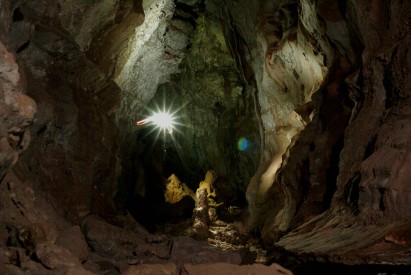 One of the hallways in Cave of the Domes. (Photo: Mag Kim)

The aptly-named Horseshoe Mesa as seen from above. (Photo: Mag Kim) 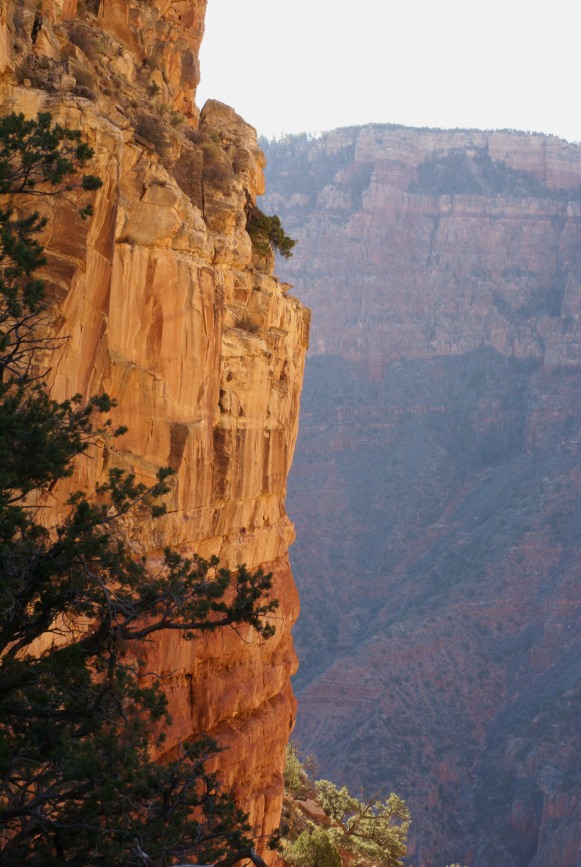 6 thoughts on “Caving The Grand Canyon, Part 1: Cave Of The Domes”